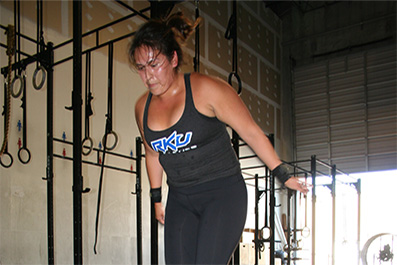 I started at CFT mid September of 2014. I had already been on my fitness journey and…had been doing Crossfit for 6 months prior in Texas and had lost 35 pounds for 6 months prior in Texas and had lost 35 pounds. Although I was sad to leave Texas, Cft quickly became my second home and my box family. I love how the coaches and fellow gym members were all so welcoming when I joined. I became a regular at the 9am class with the amazing coach Chrystal and made friends quickly. The game changer in my journey really happened in February time when the Crossfit open started. During this same time our box also started a nutrition challenge which was awesome because I had put on a little weight over the holiday months. We had two options, go paleo or count macros. I had already been on paleo before in the past so I decided to count macros and trust Shari in the process. I quickly learned that I was not eating nearly enough to support all the exercise I was doing. It was not easy at first, especially from going paleo to non paleo. Also I had it instilled in my head that carbs were the enemy in the past.

I learned very quickly they are not and are actually awesome! Since March time I have dropped 20 pounds. All my lifts have gone up, my 5k and mile time have all dropped and my Wods have improved so much. I feel lean, strong and amazing all around. For the first time in my life I feel like a normal person. I can walk into any store and know that something is going to fit me with no problems, besides jeans …but that’s just because of the my quads which I will choose over jeans any day! Even though I lost more weight the first 6 months of Crossfit, my body is changing in ways I never thought possible. My husband was deployed for the first 4 months of the year and when he got back the first thing he said was that I looked like a completely different person from the time he left. All of my family has told me that I have changed not only in the way I look but in the way I carry myself as well in a good way. I’m not the self conscious girl anymore that I had been for years. I’m so thankful I came across Cft. The coaches all have something different to offer and together they make an amazing team.

I have never been around a more supportive group of people. I enjoy coming to the gym every single day. Getting fit has made me into a better person, a Better mother to my wonderful boys, and better wife because I’m the happiest me that I have ever been. I can’t wait to see what the future holds for me. One thing I am certain of is I will continue to smash goals because of the awesome gym family I have. Thank you Guys for creating such an awesome box!